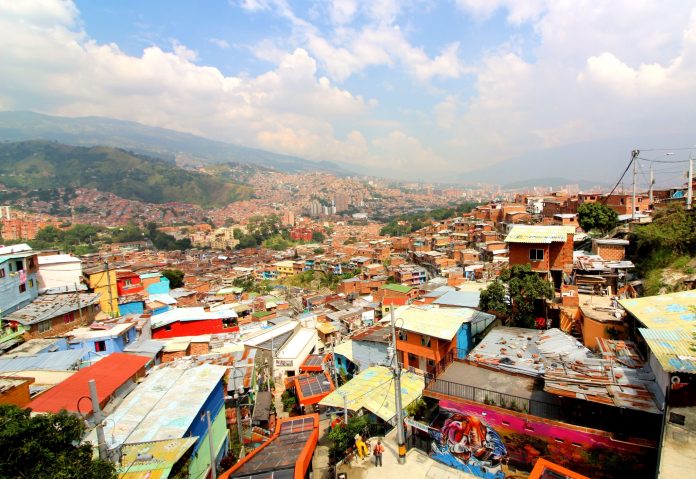 Comuna 13 is a neighbourhood in the Colombian city Medellín, with a notoriously violent history. I read about this long before my first visit to Colombia, and I’ve found the story very touching, trying to imagine what it must have been like for people who live there. Comuna 13 represented all the negative that Colombia used to stand for, everything my friends and family would warn me against. It’s always great to see how an area is being turned around and I was really looking forward to seeing Comuna 13 for myself. Before our trip, I had been doing some research and decided to take a walking tour with Comuna 13 Tours. I found a lot of good reviews about this tour, so I thought there must be some truth in it! It turned out to be a good choice. In one of Medellín’s metro stations, we met Margarita, our guide, and she had a lot in store for us that morning! 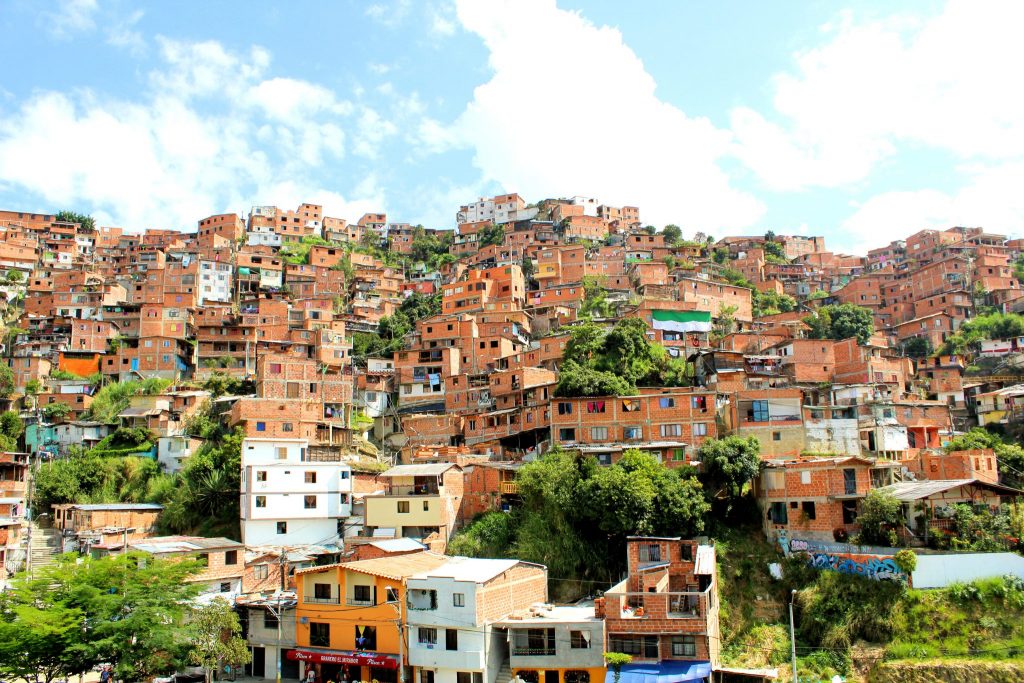 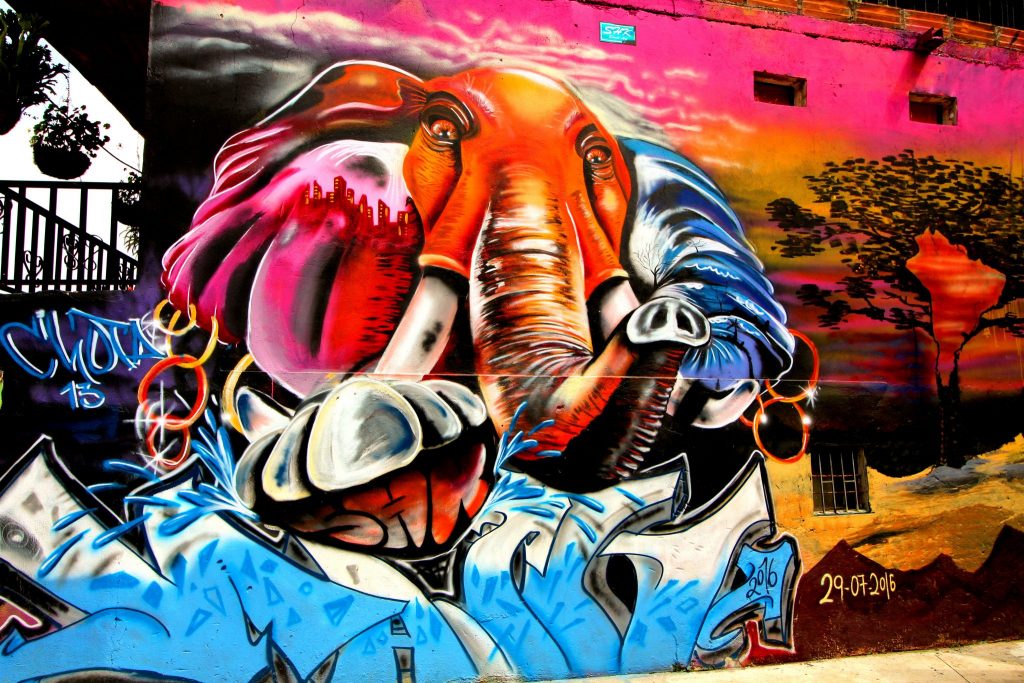 Riding the Cable Car in Comuna 13

We started with a ride on the cable car. Up the hill we got out of the cable car to walk outside onto a platform where we had a great view over the surroundings, and Margarita told us some details about specific locations we could see. One thing she spoke about really stayed with me. She told us how people used to not be able to take the shortest way out of their area sometimes, I believe mostly in the past, because of guerrillas and paramilitaries ruling specific territories. If people would have crossed the invisible borders between the different territories they risked getting killed. The cable cars were a massive help for people to overcome this problem, because it lets them travel in the air instead of over land. 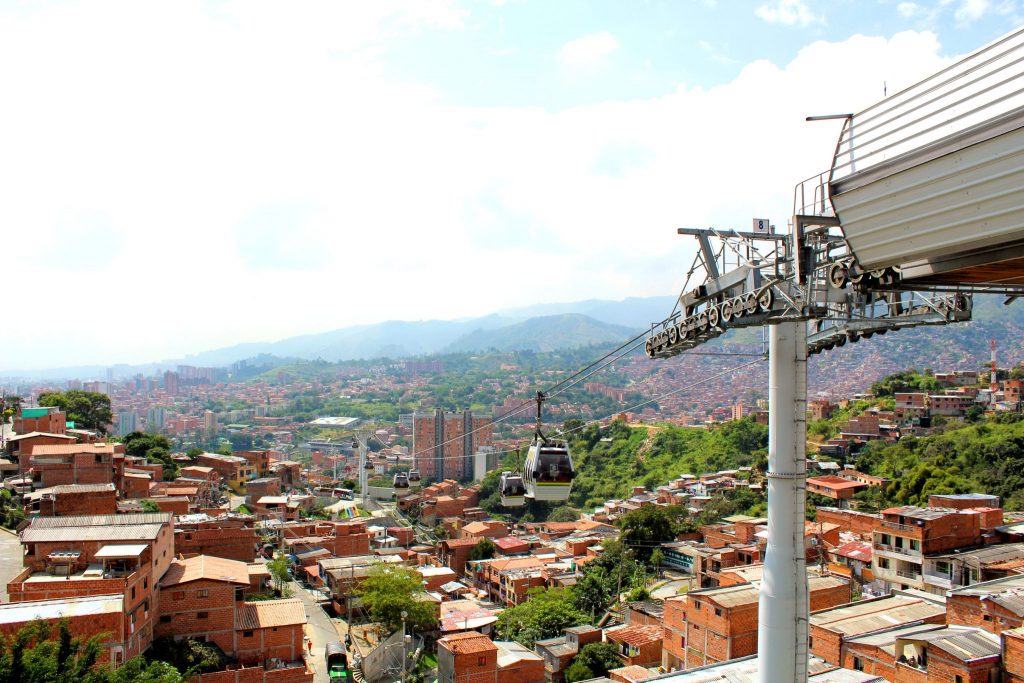 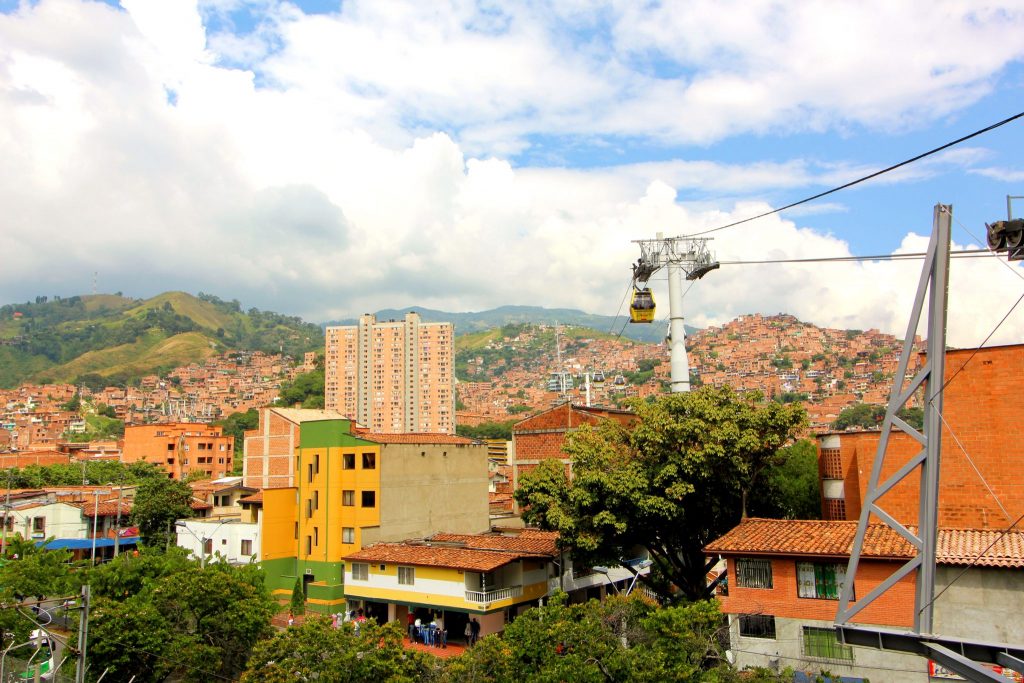 Admiring the Street Art in Comuna 13

After our trip on the cable car, it was time to dive into the neighbourhood and explore the area further. We took a ride on one of the local buses and then entered the area surrounding the famous hillside escalators. There was a lot of street art and Margarita explained what some of it stood for. Street art has been used to reunite opposing groups in Comuna 13 and send out a positive message. 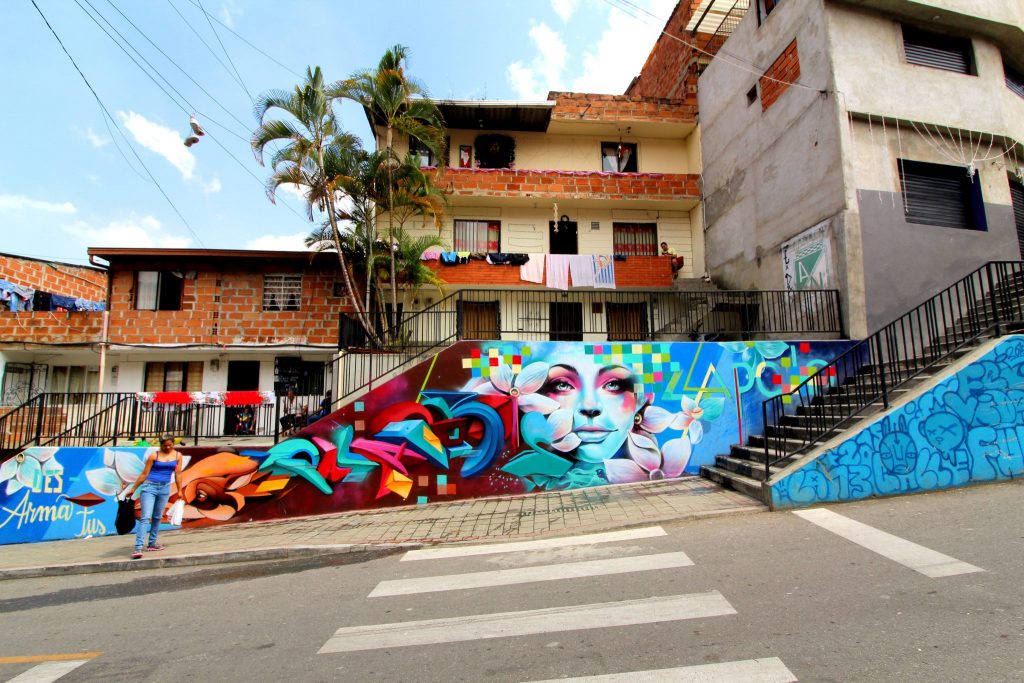 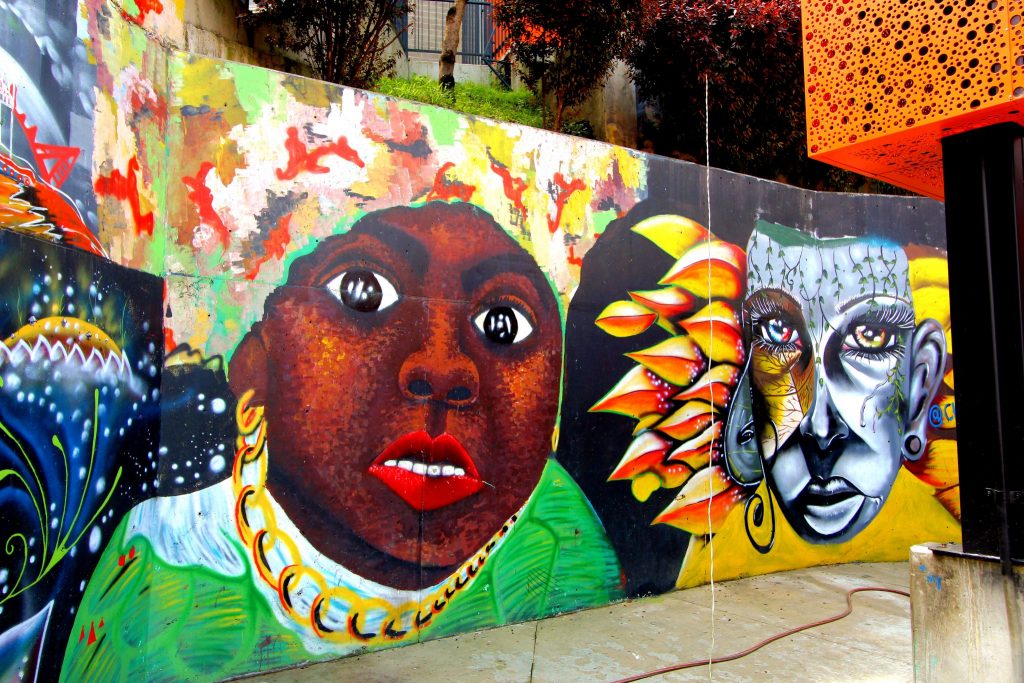 The dark past of Comuna 13

We saw a basketball court where executions used to take place in the time of terror, nowadays children are playing peacefully in that space. Margarita gave us lots of examples of how the people in this neighbourhood used to be terrorised by guerrillas and paramilitaries and it was all quite shocking to hear. I don’t really want to repeat her examples here on the blog, because it might be shocking for some people to read. The fear must have been so big for the people who lived there in that time, and so many people have lost loved ones to the conflict. 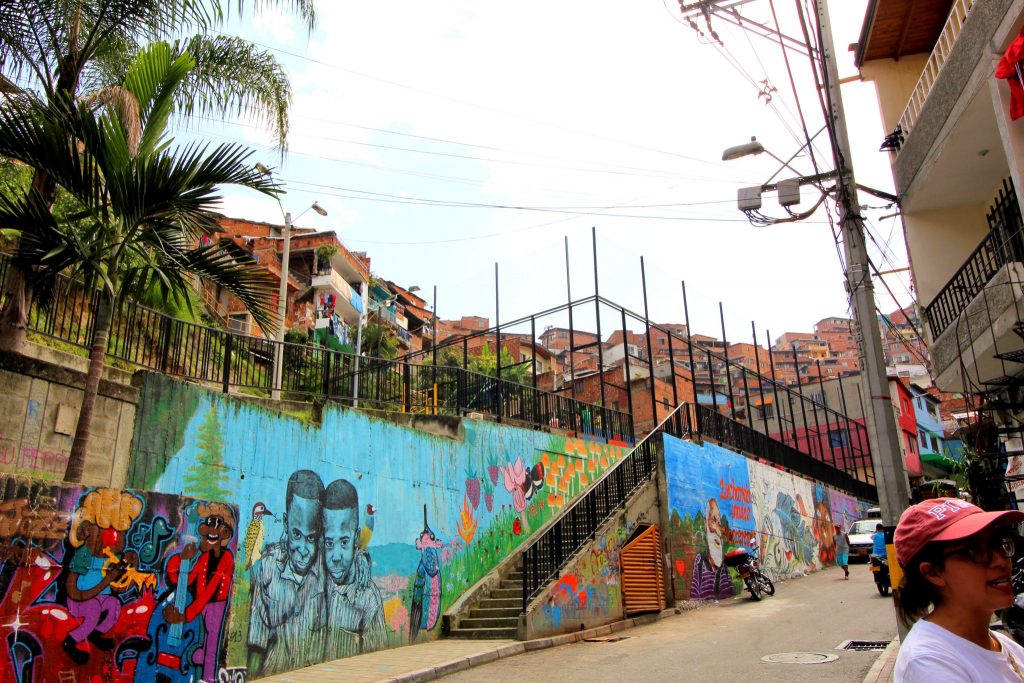 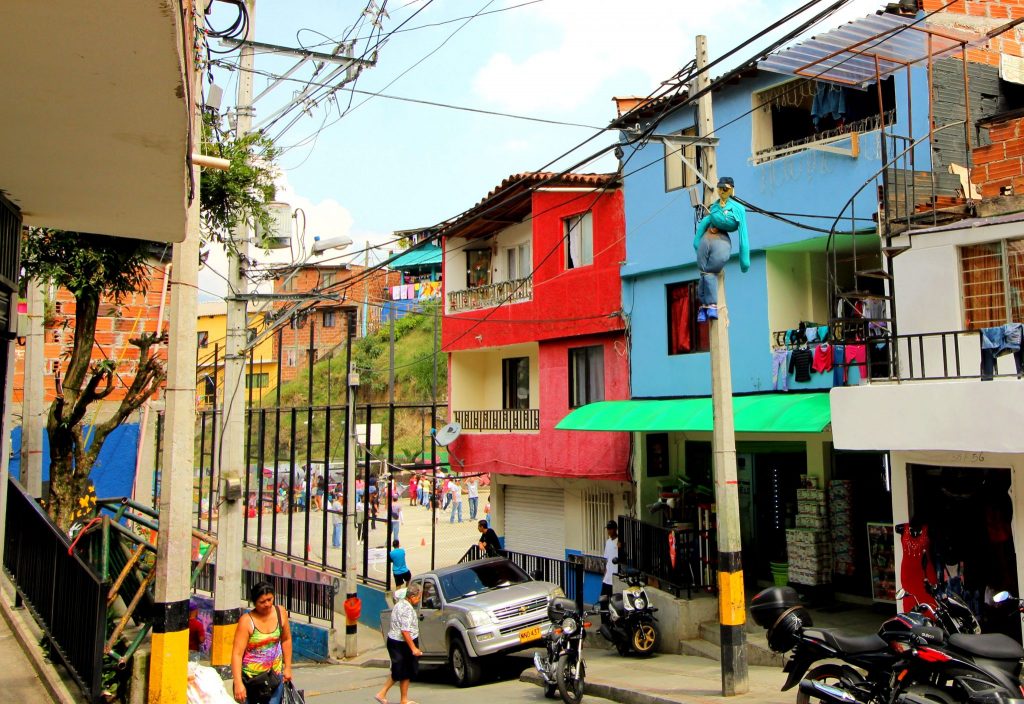 The famous escalators of Comuna 13

Then it was time to go up the escalators. They were built to improve accessibility into the centre of the city for people living all the way up the hill in one part of Comuna 13. The road towards the first escalator was already quite steep. I can only imagine how much of a climb it would have been to reach the top of the hill before the escalators were built.

When we stood on another platform with a view over the city, Margarita told us some more about how social institutions, such as the library, have improved people’s lives in the comuna. A visit to the library is normally included in this walking tour, but the library was closed because we were visiting during Christmas season. Finally, we went all the way up, so we could see the escalator project from above. There was a fun slide for kids that some of us tried out as well! 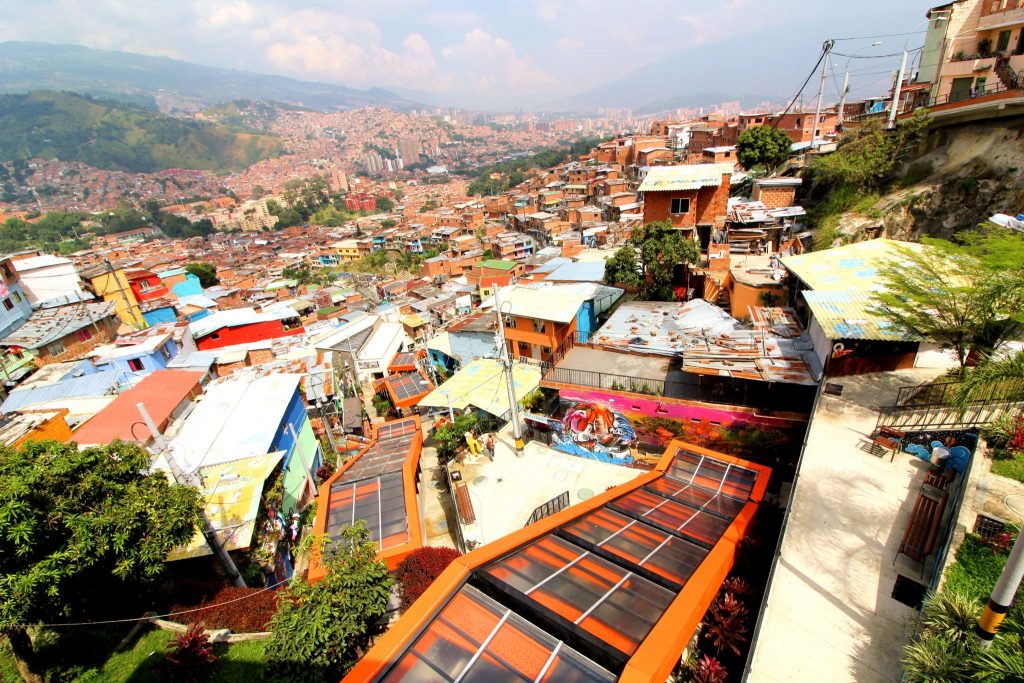 After that it was time to head back down, but we didn’t go all the way down straight away. First, we were treated to a special homemade sour mango ice lolly at one of the local houses. We were sitting there with our ice lollies, being an attraction for the local kids who came to have a look at us ?

Comuna 13 as an example of hope

My visit to Comuna 13 has filled me with hope for other poor and unsafe areas in the world. Although the situation may not be perfect yet, Comuna 13 is on its way up, and who would have thought that some years ago? Situations like these are very complex and there isn’t always an obvious solution. I still believe there is hope for so many people in the world, as long as we don’t forget about their existence and their daily struggle. For me, Comuna 13 stands as a symbol of hope for the many people in the world that have been forgotten. I so hope that many dangerous neighbourhoods can be turned around like this, so that more normal people can lead peaceful lives. 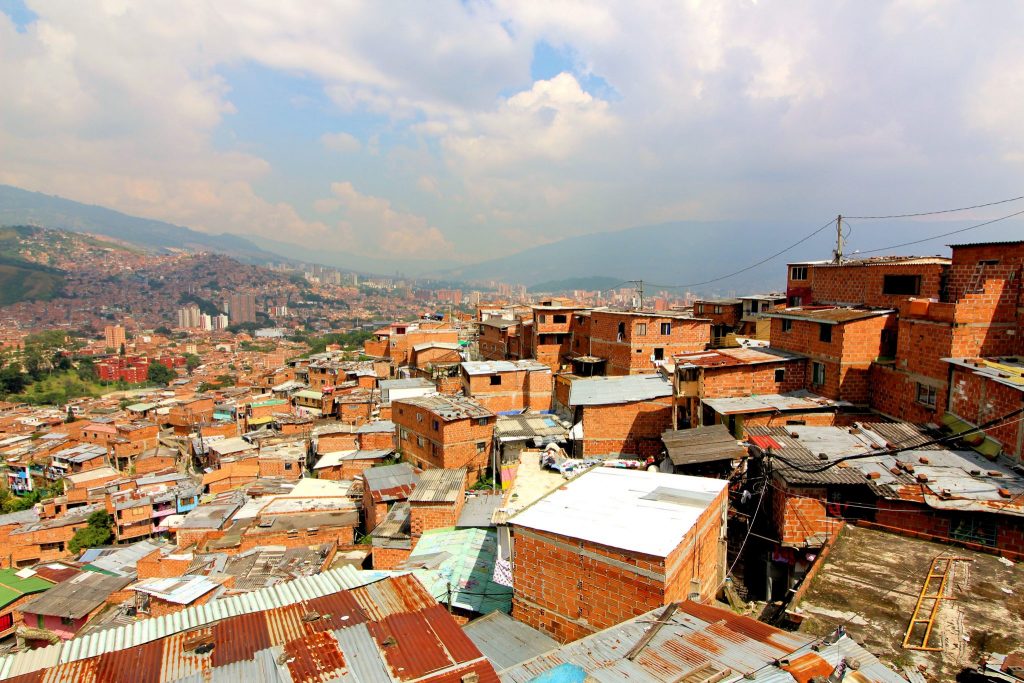 I understand that when it is about Colombia, and Comuna 13 in Medellin in particular, some people might be nervous to visit. Although I wouldn’t say that it is the same as visiting a random neighbourhood in a European city, I have felt very safe in Comuna 13. We’ve seen children playing around us and in different parts of the neighbourhood. Although I don’t really speak a lot of Spanish, every person in the neighbourhood we came across looked friendly and at no point have I felt scared or threatened in any way. All of this might be because we were on a guided tour, and it is very likely that the locals know the guides because they keep coming back with different groups of people. 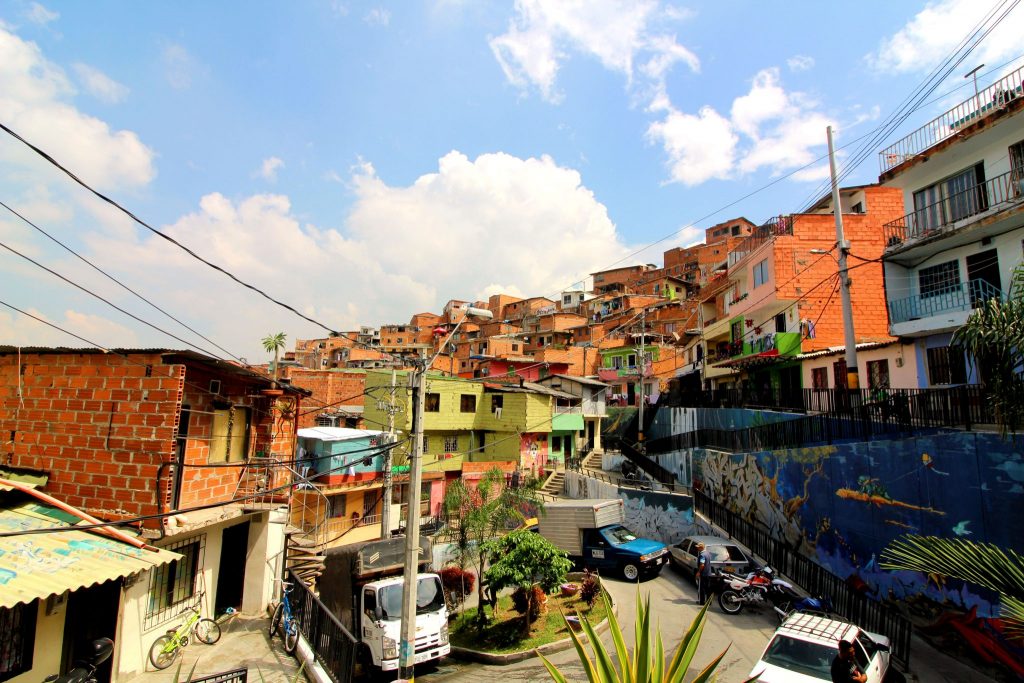 I guess it is a good idea to always be aware of your surroundings, and if something doesn’t feel OK, you should trust your gut feeling. In general I know Colombians to be very warm and friendly, but there are obviously exceptions as well. I believe it is just a case of common sense, doing your research, and not taking excessive risks. You should be fine visiting Comuna 13 with one of the guided tours. I wouldn’t advise visiting Comuna 13 without a guide who knows the area, because you just don’t know how the people will perceive strangers treating their neighbourhood as a tourist attraction. 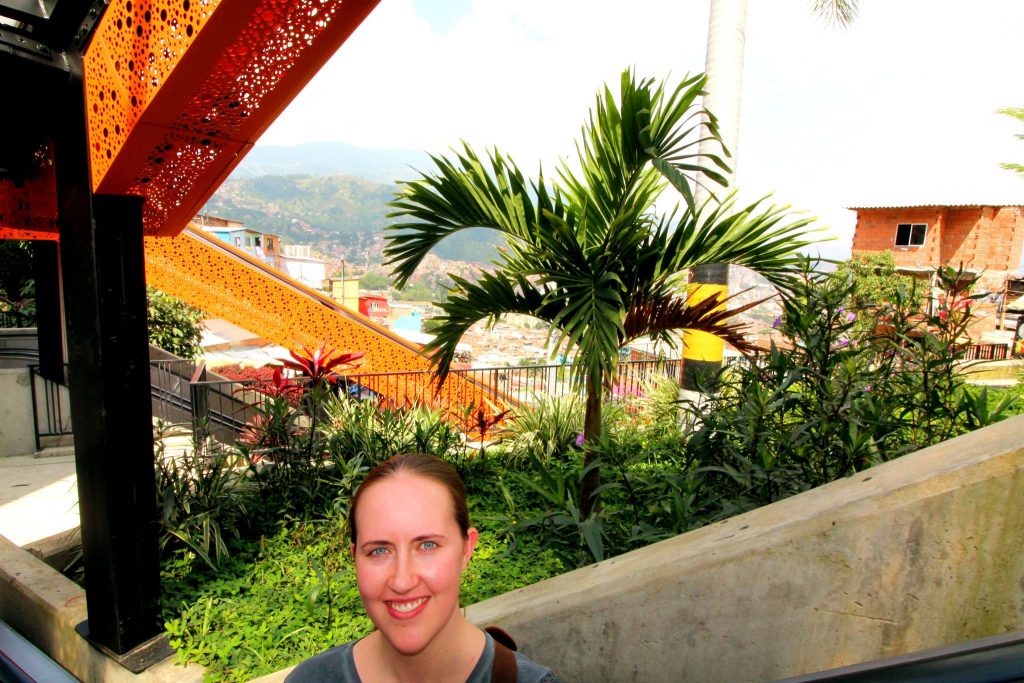 Thanks for reading, I hope this has been useful! Please leave your comments below!

Disclaimer: this is not a sponsored post. I have paid for this walking tour myself, and I would like to recommend it solely because I enjoyed it so much and thought it was a worthwhile experience! Please do look into the current safety situation before blindly going outside of the main tourist areas in Colombia, the situation for foreigners in Colombia fluctuates and especially in less touristic areas. 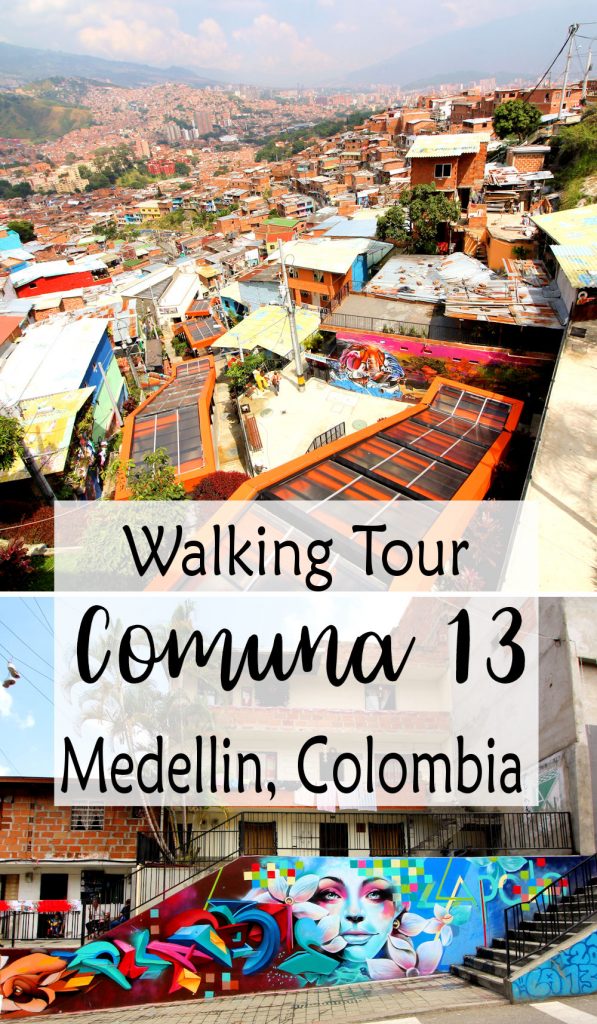 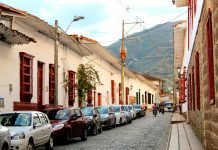