Tomorrow I’m hopping on a train for a three-week interrail trip to Central Europe on my own. I’m planning to visit Munich, Salzburg, Ljubljana, Vienna, Krakow, Prague and Berlin. I’m excited and nervous at the same time. This is going to be my first real solo trip. I’ve taken many flights on my own, spent the occasional day alone at a destination, even moved to London alone. But I’ve never travelled alone for several weeks. I’ve always wanted to try solo travel. Independence is something I find very important. I want to know that whatever situation I may find myself in, I’ll be strong enough to deal with it. I believe it builds character. Even if I wouldn’t enjoy it, it will hopefully still be great life experience. It’s the hard times that teach the most.

But this doesn’t mean I’m not scared. I’m so excited for all the adventures I might have, but I’m also scared that it might be terrible and I’ll be feeling very lonely. That maybe I should just stay home and make my way through my book collection and catch up sleep ? There are several things I feel nervous about, because this trip is going to be many firsts for me.

It will be the first time I’ll be sleeping in hostels and even night trains. Apart from summer camps I’ve never slept in a room with strangers, and I’m not sure I like the idea. It is however something I think I should try while young, so I’m gonna go for it! As so many people stay in hostels all the time, I should be fine. It’s just that I don’t really know what to expect and I’m not an easy sleeper, so I’m slightly nervous to see how it goes.

I’m also feeling a bit nervous about taking trains in countries where I have no clue about the language. Will I be able to find the right trains on time? If I get lost, will I be able to ask for help? I’m generally a bit scared to travel to countries where I don’t understand a single word of the language. I’ve learned many languages in school, so in most countries I’ve visited I’ve had at least a basic understanding of the language. Or other times the language was similar to one I already spoke. You often hear about native English speakers being inflexible or apprehensive about foreign languages, but I must admit that I feel the same way when it comes to unfamiliar languages. I’m sure I’ll be fine, as many others have done this before me. And I guess in touristic city centres at least some people will be able to speak English.

But then there is one thing left that scares me the most: I’m about to leave on a multi-city train trip on my own… I’ll be solely responsible for my survival in unknown places. On top of that comes minding my belongings and finding my way around everywhere. And I’ll have no one to share the experience with, no one to go to a bar or restaurant with and no one to have a fun time with. I know that I might be a bit overly dramatic here. People travel alone all the time. I am a capable human being, so why feel fearful or nervous? I love being alone, but only for about a day or two. After that it gets weird. I start talking to myself, try to make myself laugh with stupid jokes. And after that I just start to feel down and lonely.

I’m not afraid of meeting new people, I’ve had to get over that fear on the day I moved to London. It’s still scary to be the one to start a conversation with a stranger, but I can do it if I push myself. But then I ask myself; what if there isn’t anyone to meet? What if everyone else in the hostels is part of a group of friends already? What if I’ll really be on my own?

That is the thought that scares me most. I tell myself I can go out and see cities on my own, take as many pictures as I want, without feeling rushed by other people. That’s a bit of luxury I like the thought of, but I am still apprehensive about feeling lonely.

I think it all comes down to one lonely afternoon I spent in New York, a little over three years ago. It was the time when David was living in Colombia and we were in a long-distance relationship. I had just visited him there for the first time and knew for sure that I wanted a future with him. That morning we’d said our goodbyes and we didn’t know when we would see each other again. It was later that day that I would roam the streets of New York on my own.

I thought an overnight stop would be a great opportunity to get to see a bit of New York, but it turned out to be a big mistake instead. Still feeling sad about the goodbye, I walked around the city. I’d just come from warm Colombia, and New York was cold in April. The cold seemed to go right through me and I was literally shaking. But I had to see New York, so I bought myself a cardigan and went to explore. Times Square, Grand Central Station, the Empire State Building and Central Park. I’ve seen them all, but I haven’t really experienced them. My chest felt hollow, and I could only think about the fact that I was all alone. On that day, surrounded by so many people, I felt so vehemently alone. I clearly didn’t have a good time in New York. It has left me with sad memories and a certain dislike for the city altogether. I’m sure it’s not New York’s fault, I never should have visited on such a sad day.

The thing is, I am now afraid that being lonely will result in sad memories of all the lovely places I’ll be visiting the coming weeks. Although I’m probably just being over dramatic ?

Please let me know your thoughts and experiences on solo travel in the comments below! Any reassurances very welcome ? 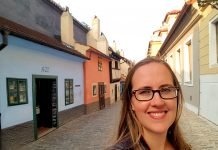 My First Solo Travel Experience; I Have No Regrets