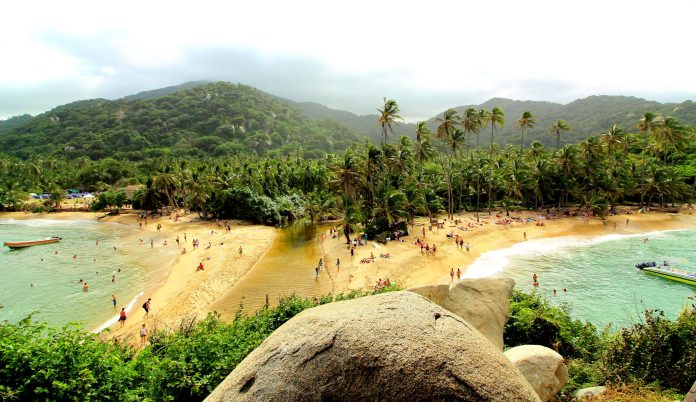 Having heard so many wonderful stories about Parque Tayrona in Colombia, David and I decided that it was time we would finally see it for ourselves. Even though David is from Colombia, he had never been to Tayrona National Park, so it was all new for him too! We booked ourselves a three-night stay in a hotel close to Santa Marta and went on a day trip to Tayrona National Park. We’d heard a lot of stories of long queues into the park in high season (we went in December), so we decided to join a tour that guaranteed entrance and would pick us up from our hotel in the morning. We then hiked the park just the two of us together.

The hike through the forest of Tayrona National Park

Waking up at 5.30 AM, we were ready waiting in the lobby for the bus to pick us up. We kept waiting and waiting and started thinking that this would all end in a massive disappointment… But 20 minutes later the bus finally arrived to pick us up and we were on our way! We drove past Santa Marta, where I thought the surroundings sort of looked like a tourist destination in development. We were dropped off at a point where we had to watch a video first, and then started our hike. It looked like we were starting on a hike into the rainforest! 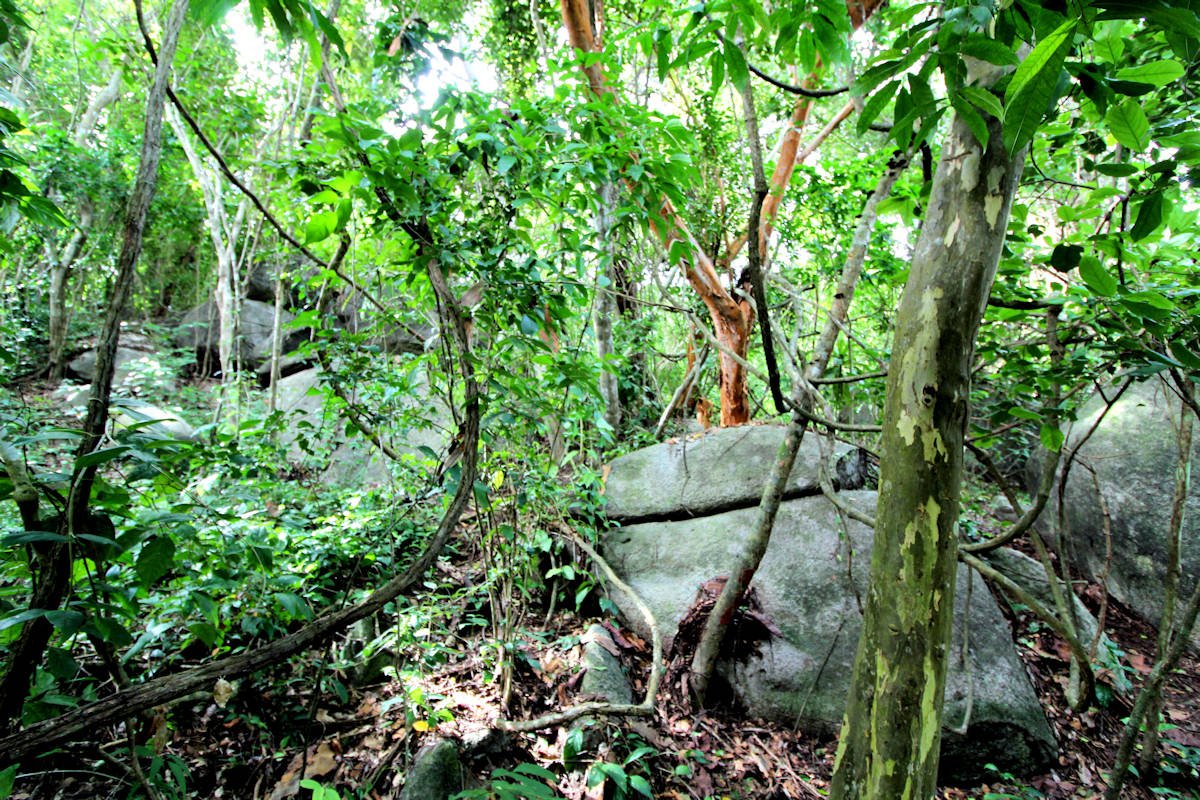 There was lots of green all around us and at one point we’ve even seen monkeys! (I would have liked to show some photographic proof, but the monkeys were too quick for me to catch!) Inside this rainforest, you can find groups of massive stones scattered through the landscape. These types of stones are typical of Parque Tayrona and you will see them all around the park, even on the beaches.

There were lots of people surrounding us on the trail through the forest. Large parts of the trail were covered with wooden pathways. I suspect they have built this structure because the place can get quite muddy in rainy times. When we were there in December everything was quite dry, so there was hardly any mud at all at this part of the trail. The wooden pathways make for an easy and fast route through the forest and are easy to follow. I would therefore say that you could easily do this hike without a guide, as the route is clear and there will likely be more people on their way to the beaches of Tayrona National Park.

After a bit of climbing you will get to a viewpoint at the top of the rocks, where the view over the sea is a wonderful reward for the climb.

Then you reach the first beach of Parque Tayrona

Following the pathway down, you will get to the first beach of Tayrona National Park: Arrecifes. You’ll see warnings that many people have drowned while swimming in the sea at this location. Therefore, if swimming is your goal, keep on walking! The sea looks quite rough here, which is definitely impressive to watch. 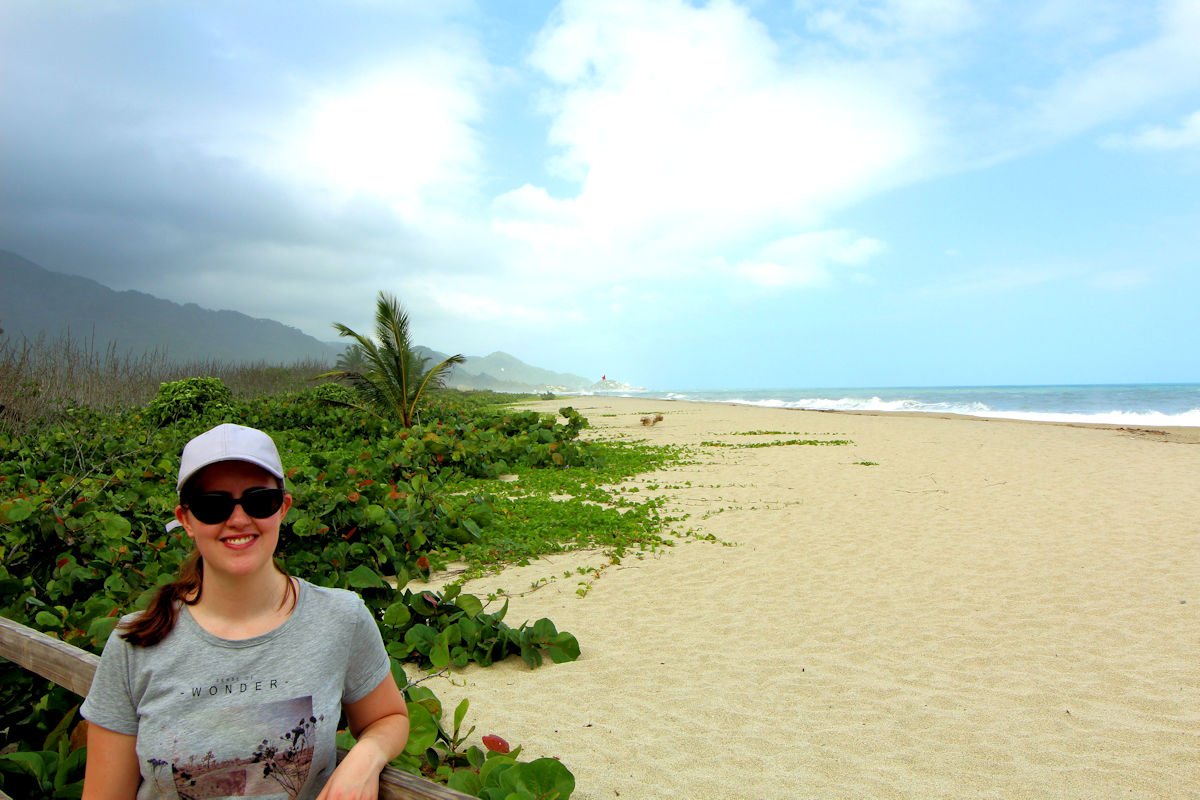 You’ll continue along the beach, through the sand; it’s a lot of beach. After crossing a small stream, another bit of beach and some vegetation, the next beach you’ll encounter is called La Piscina. This is a beach where you can swim! However, don’t just take my word for it. Swimming in Tayrona is very dangerous if it’s not allowed, so please always check the signs and see for yourself if it looks safe! La Piscina is also the last beach where you can take a break before going back into the forest to reach Cabo San Juan. 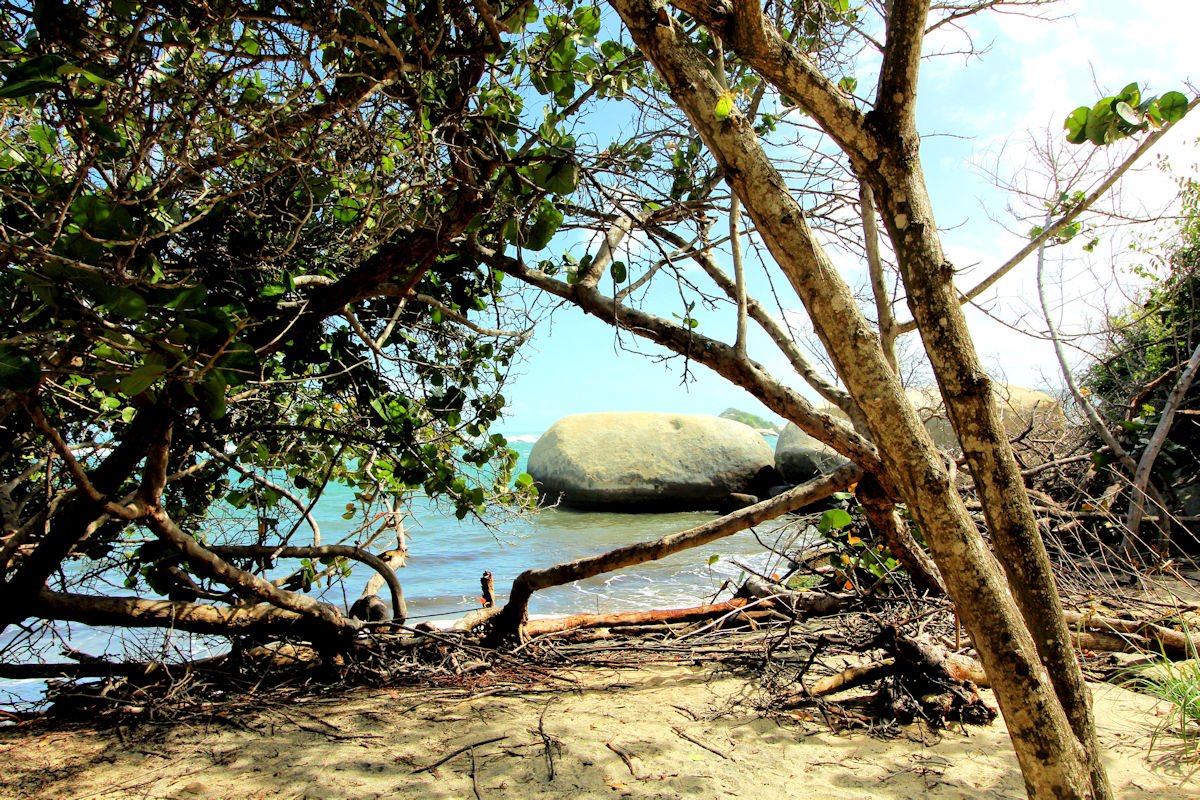 Then comes the hardest part of hiking Tayrona

After La Piscina it is time to dive back into the forests. David and I experienced this as the most tough bit, because the walking isn’t always easy here! Firstly, forget about nice wooden pathways. It is challenging with large rocks (sometimes slippery), mud and narrow paths to get around massive mud pools. At one point I nearly lost my balance on a large rock, luckily someone behind me pushed me back up! If you are used to hiking slightly tough terrain I think there’s not too much of a challenge for you. But if you’re a beginner hiker like we are, this last bit to get to Cabo San Juan might prove a bit tricky for you. Also, we went in a reasonably dry period, so I think it gets a lot muddier than you can see in my pictures! 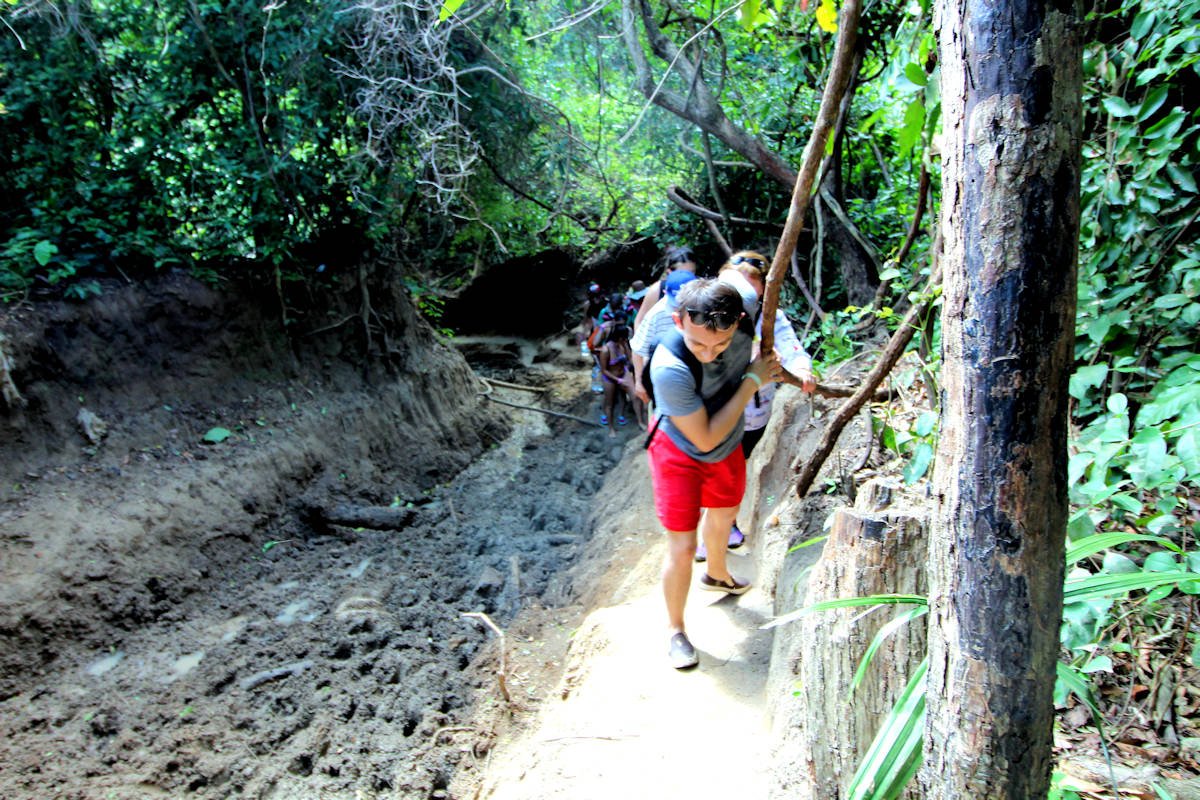 And finally: the paradise Tayrona National Park is known for

When you have made it through this last bit of the trail, paradise awaits you! This is the place you see in all the pictures, and it really lives up to them as well! Cabo San Juan is truly stunning and I could have spent many days there. I’m hoping to go again at some point in the future and then I would definitely want to use the opportunity to stay for a few days and use the camp site. 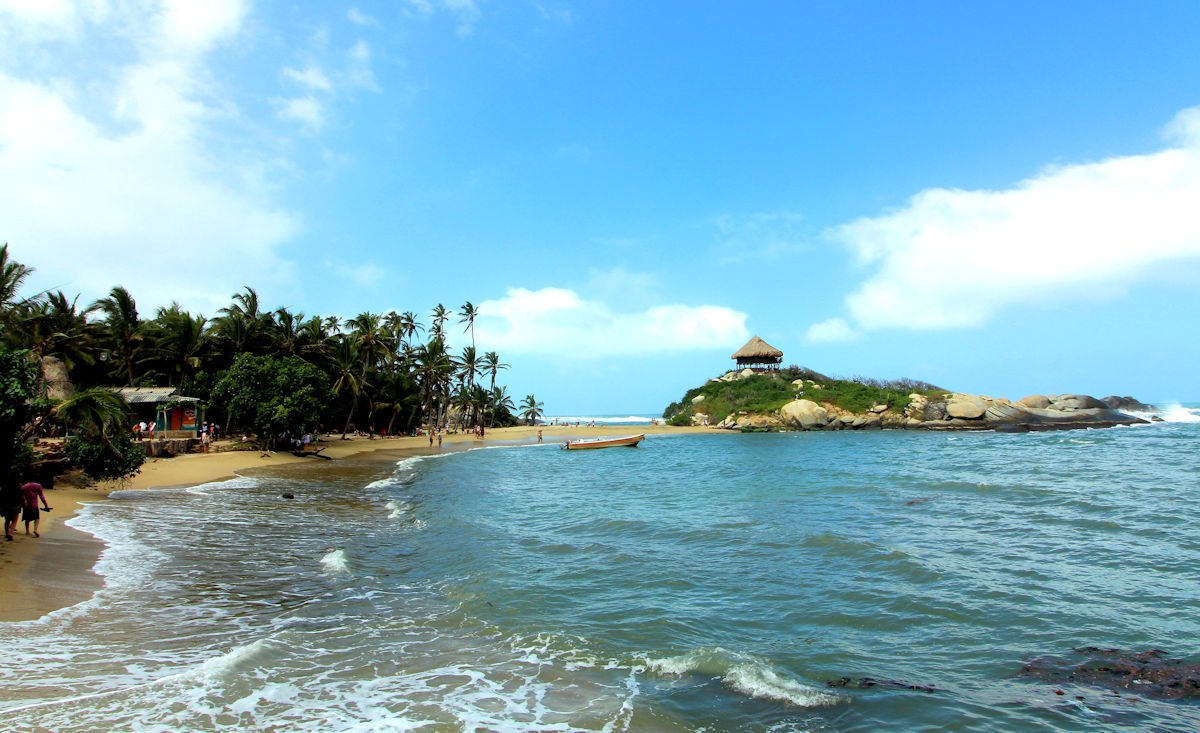 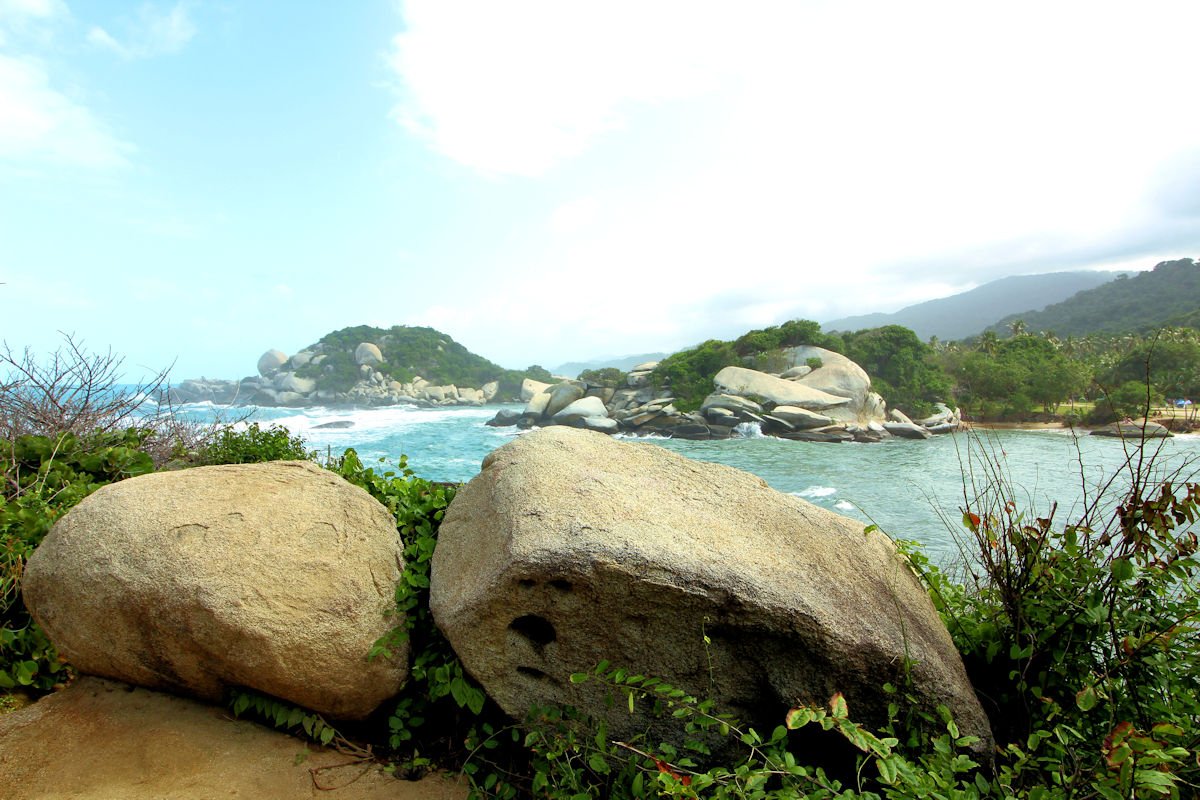 When climbing up to the hut you see in every Tayrona picture, we got a little surprise. Right next to the hut we found an iguana! I don’t think I had ever seen an iguana in ‘the wild’, so I was super exited and took loads of pictures!

Get out before dark, or sleep at one of the campsites of Parque Tayrona!

I took so many pictures, that my memory card got full and we hiked our way back with my camera safely hidden in a backpack. The way back was the same as the way in, so no surprises there. Just make sure you get out of the park before dark! I don’t know what would happen if you get stuck there… I felt exhausted and in desperate need of a shower, so I wanted to get out of there as fast as I could. David and I, being complete hiking beginners, took about 3 hours on the way back. We left Cabo San Juan at 2.30 PM so we would make it back before dark. On the way into the park we took longer, because I wanted to take pictures everywhere!

If you feel you are not up for the long hike, there is a possibility to make the journey on horseback. This was quite expensive though, and I think anyone who is in reasonable physical shape should be able to complete this hike. Horses and donkeys are being used to transport drinks and other supplies into the park, so they can walk the route blindly. We’ve seen them walk past us unaccompanied, looking very bored, while carrying massive loads of water bottles and other drinks. They looked in reasonable shape, though a bit skinny. I guess it’s up to you whether you feel OK paying for an animal to do all the hard work for you.

I hope my experience is a useful guide to you. If you found it helpful, please leave a comment below, I’d love to hear your opinion! 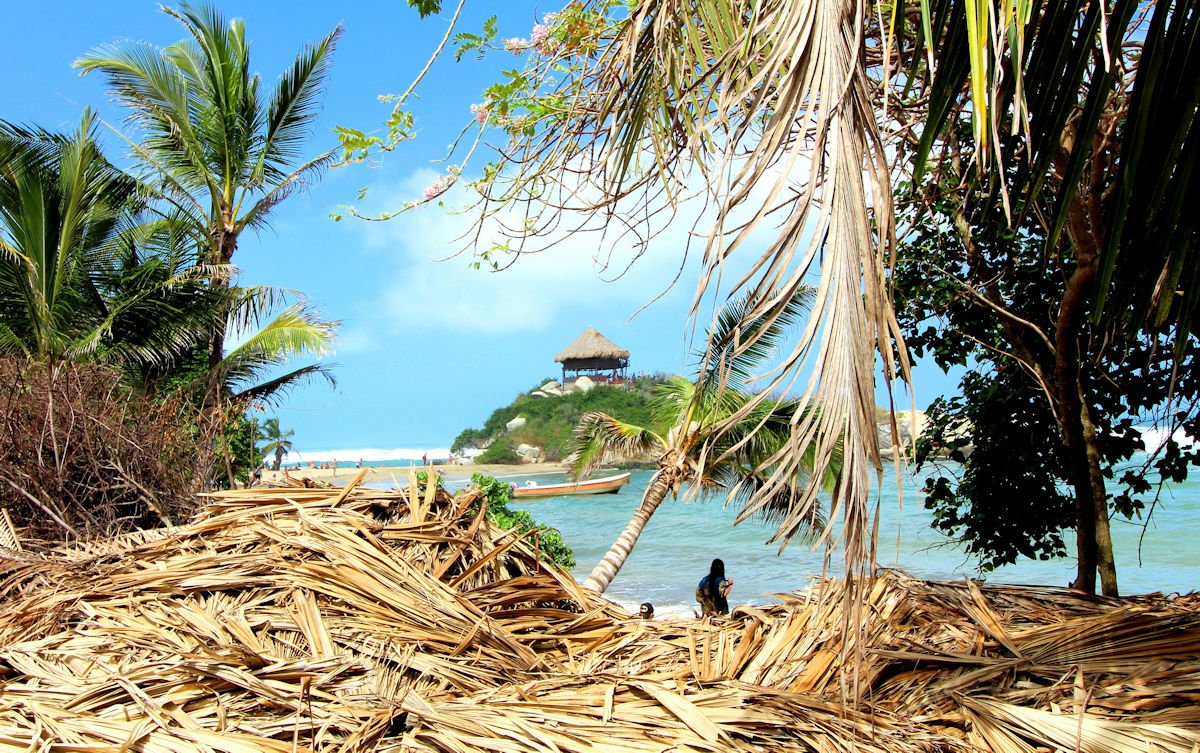 If you’re visiting Colombia, don’t forget to read my other posts about exciting things you shouldn’t miss in this beautiful country! I’ve written about Comuna 13 in Medellin and Santa Fe de Antioquia, which is a lovely day trip from Medellin. And read here why I love Colombia 🙂 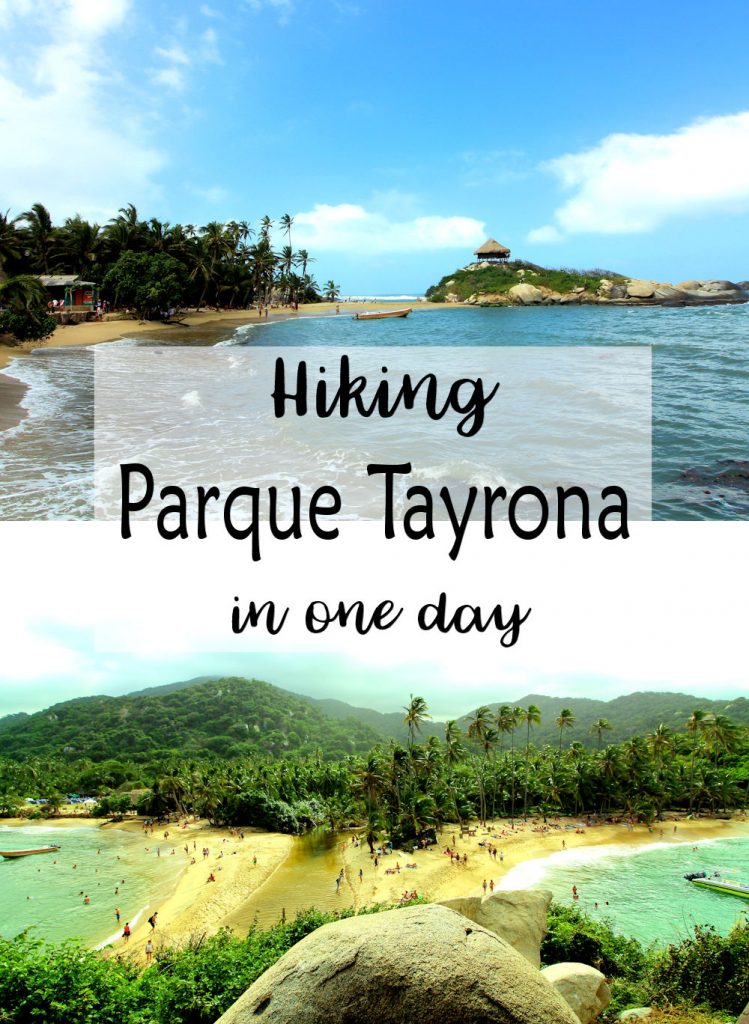 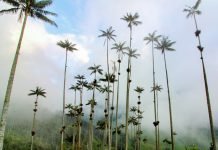